END_OF_DOCUMENT_TOKEN_TO_BE_REPLACED

Growing at her own pace. Lindsay Arnold, who is pregnant with her first child, worried at one point that her baby bump was not shaping up like it should have been.

The Dancing With the Stars pro, 26, reflected on some of her favorite Instagram posts during Us Weekly’s “I Can Explain” game. “This was a fun picture because I feel like it was the first time I was like, ‘Oh, there’s my belly. Like, I have an awesome baby belly.’ It was very exciting,” she recalled of her June 24 bump photo. “I was kind of waiting for it and starting to be like, ‘Is this weird? Like, I feel like I should be popping a lot more.’”

She added: “My body was definitely changing, but when I looked in the mirror and was like, ‘Oh, my gosh. You can see that there’s actually a baby in there,’ it was pretty cool.” 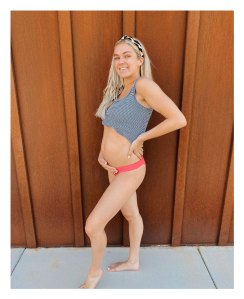 Arnold then revealed that she received support from her season 28 partner, Sean Spicer, even before she was expecting. “He was so kind all season to me, and I remember him telling me specifically one time in an interview, [he was] like, ‘You are going to be such a great mom.’ And that meant a lot to me ‘cause, at the time, we had decided that we were gonna start trying,” she recounted. “When I told him, he was like, ‘I’m so happy for you. You’re gonna be such an incredible mother.’ And it was just very sweet of him.”

Elsewhere in the game, the dancer noted how she and husband Sam Cusick once handled their long-distance relationship. “At the time, my husband was living in Utah and I was down in L.A., so he wasn’t living with me there,” she said of an October 2018 snap. “He would fly out on the weekends, stay for the show, have to fly back right after the show to get back for work, so basically we dated in my trailer outside the Dancing With the Stars studios. ‘Cause that was pretty much the only time we got to see each other, was on show days at my trailer.”

Arnold announced her pregnancy news in May. She and Cusick, who married in June 2015, are expecting a baby girl in November.

The reality star admitted earlier this month that the initial weeks of her pregnancy were not easy. “Right now I’m at 21 weeks and I am feeling great. I feel like the first 12 weeks, people don’t joke, the first trimester is very tough,” she told Us. “You don’t feel like yourself. There’s so many things changing. I had a bit of nausea. I was always tired.”